Vietnamese religious activities are variable. It is not exaggerative to say that Vietnamese religions and beliefs help to contribute to Vietnam’s multicolor religious picture, thereby creating the diversity of people’s spiritual life. In addition to major religions such as Buddhism and Confucianism, Caodaism which belongs to indigenous religions is also one of the most popular ones.

The Origin & Meaning of Caodaism in Vietnam

The name of the religion carries its own meaning. Cao means high and Dai means palace, so Cao Dai means high palace which refers to the supreme place where the God reigns. Originated from the south of Vietnam during the years of early 20th century, it is officially formed in 1926 by a group of 247 disciples. In 1975 when Vietnam unified, however, the Caodaists’ activities were brought into restriction by the interference of the Communist government. 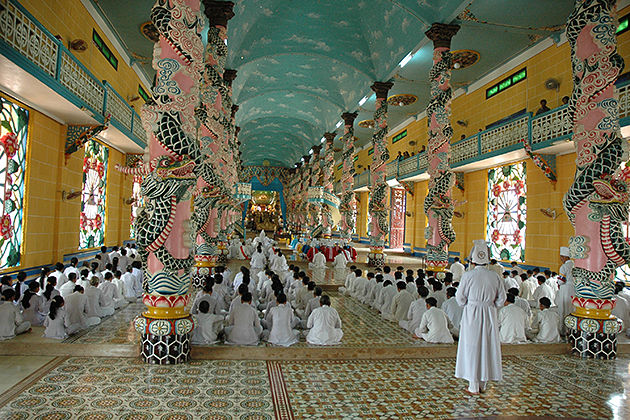 The Features of Caodaism in Vietnam

Caodaists’ beliefs involve a part of God’s spirit in which a person has to experience a series of lives. Moreover, it values vegetarianism which is considered to cause no harm to other creatures. Especially, Caodaism also partly depends upon precepts brought by Confucianism and theories from Buddhism, coupled with influence from Catholicism. According to God’s spirit, Caodaism was founded in order to maintain the harmony between various religions and thus enhance peace as well as understanding between each other. Therefore, Caodai followers also aim to look for religious values and avoid bad karma. 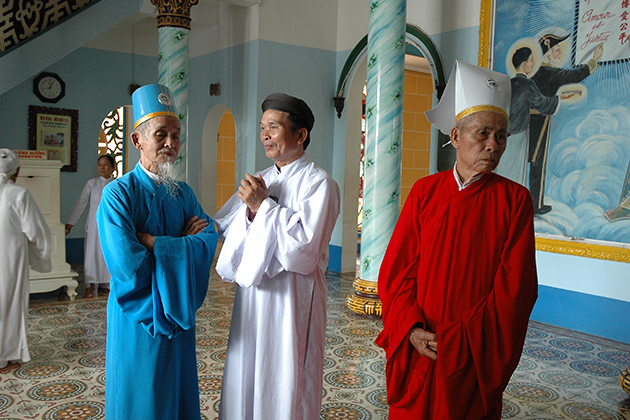 While Caodaism’s beliefs originate from Buddhism, Confucianism, and Catholicism, its practices are drawn from Taoism in which it promotes obedience via three main duty roles including king and citizen, father and son, husband and wife. Additionally, five main rituals are also promoted such as reliability, obligatory, humanity, knowledge and civility.

Caodaism mainly exists in a province known as Tay Ninh which is 58 miles away from Saigon. It resides in a cathedral named The Holy See which was built between 1933 and 1955. Also, major religious centers become the home to nearly 8 million followers in Vietnam and 30,000 members more or less in the United States, Europe, Canada, Asia, and Australia.

The Influences of Caodaism in Vietnam

Caodaism is the unique religion founded by God during the Third Period without distinction of religions, peoples … Therefore, one of Caodaism characteristics is respect for religious beliefs and customs of the followers who should not refuse or limit their activities related to beliefs or their traditional customs. 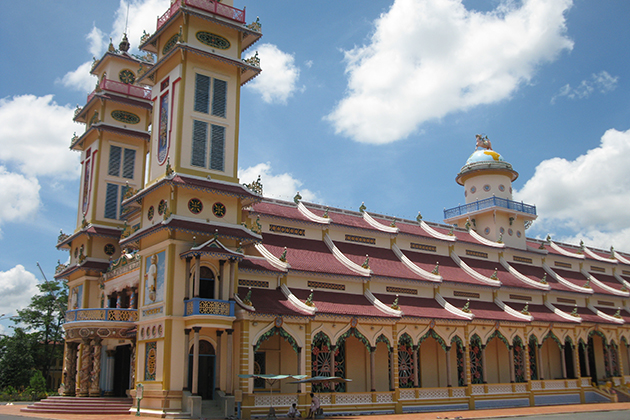 Popular beliefs in the south of Vietnam have great influence in Caodaism. Most activities of this religion concentrate on family rituals associated with the traditional customs of the Vietnamese people, such as weddings, funerals … Of course, it is organized by following the principles and philosophy of Caodaism, but all relatives to the traditional customs of Vietnamese people. In addition, these ceremonies with the participation of many dignitaries, followers… make the celebration more solemn. On the other hand, the ceremonial music of its followers is actually a part of the traditional music of Vietnam.

With tolerance, in less than 100 years of creation and development, but Caodaism becomes one of the three largest religions of Vietnam after Buddhism and Catholicism.