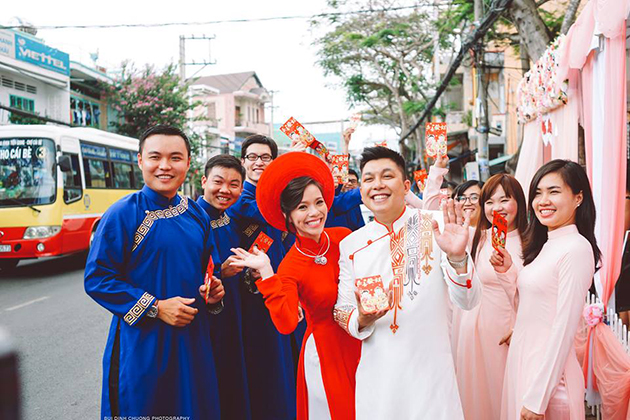 Before the Vietnamese Engagement Ceremony 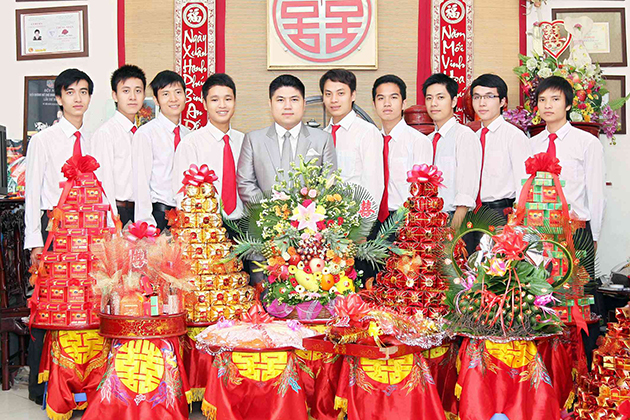 During the Vietnamese Engagement Ceremony

In the chosen good time, the fiancé’s family starts to go with a group led by a high ranking position representative, the older of family, relatives, neighbors, and friends. Though using any transports among car, motorbike, trishaw or even walking based on the distance of both houses, the boy’s family must stop about 100 meters far from the girl’s house, arrange teams then bring gifts into the girl’s house. The young and single boys bear the gifts and the corresponding girls in the fiancée’s family will receive them. In the past, they all wore red long dresses to express joys and happiness. Now the boys wear a white shirt and dark trousers or jeans, red tie if any, girls wear red áo dài. In the engagement ceremony of Southern Vietnamese, the boys now wear blue traditional ao dai. 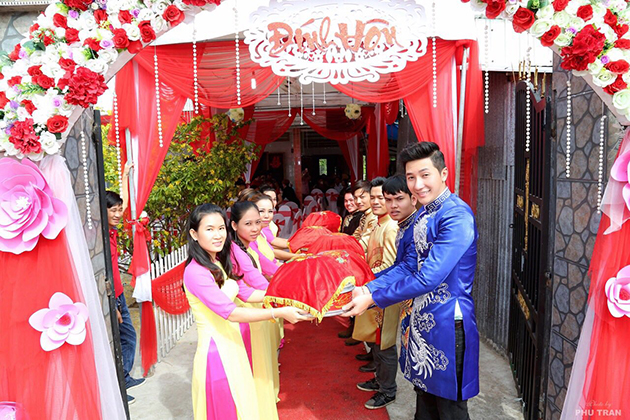 The fiancé’s team will be invited to sit down on the arranged seat before two representatives of both families state their speech of establishing the relationship between two families and their children’s marriage, exchange gifts, and discuss the wedding ceremony. In the past, the girl’s family often regales the boy’s team a tasty tea break including dishes of cakes, betel and areca nut, tobaccos, melon seeds, or sunflower seeds and cups of hot tea. Nowadays, they can invite the fiancé’s team to enjoy a delicious banquet.

The fiancée wears an exquisite traditional red áo dài and must stay in her room until the fiancé comes to pick up or her parents ask for going out. After that, the young couples will pay in front of the altar of the girl’s family to receive the witness of their ancestors. The gifts are put on the altar. Also, in front of the witness of all people in both families, the fiancé gives the fiancée the engagement ring.

After the Vietnamese Engagement Ceremony

After all, rituals finish, it is encouraged that a small part of the gifts is sent back to the fiancé family for luck. When dividing the gifts, it is not allowed to cut areca nuts by a knife but only by hand. The number of betels, areca nuts, and cakes is divided into an even number starting from four and more. The fiancée’s family should not cover the traps when receiving the returned gifts. The rest of the gifts will be given to the relatives, friends, and neighbors of the fiancée’s family as an announcement that their child will have a new family. It is good to bring an engagement card or even a wedding card that notes the wedding date, time, and place along with these gifts to invite them to join in and share happiness with the family. 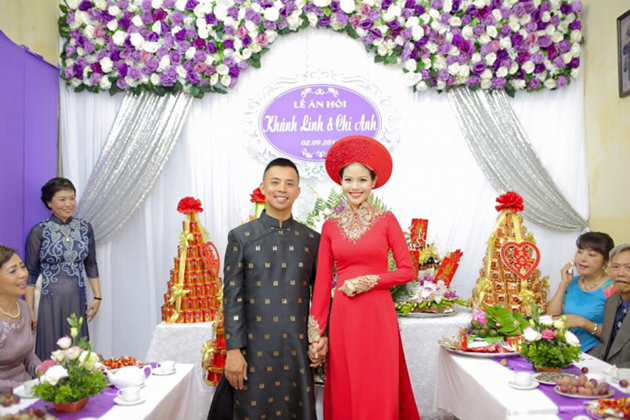