Vietnam is a country with many ethnic groups such as Kinh (the largest proportion), Thai, Tay, Muong, Hmong, Dao… It will be wonderful experiences to discover Vietnamese culture through these ethnic groups in your Vietnam tour.

With a population of over seven hundred people, Dao ethnic group widely habit in northern Vietnam including provinces of Cao Bang, Ha Giang, Lao Cai, Yen Bai, Lai Chau, Tuyen Quang, and Lang Son. They were known as a migrating community from China in the 12th and 13th century and early 20th century. It is divided into subgroups depending on their customs, habits, and costume, especially easy recognition through their clothes. For example, names of subgroups as Dao Quan Trang – Dao with white trousers, Dao Quan Chet meaning Dao with tight trousers, Dao Tien meaning Dao with coins, Dao Thanh Y – Dao with the blue dress, Dao Do – Dao with red color clothes.

The Lifestyle of Dao People

Upland and wet rice cultivation have risen up for a long time and remained up to now. They also plant some crops and breed cattle and poultry. Agriculture equipment is initially rudimentary, then improved gradually and applied more techniques. They build houses following 3 styles: stilt house, a half stilt, and half land house, and non–upstairs house.

Upland and wet rice cultivation have risen up for a long time and remained up to now. They also plant some crops and breed cattle and poultry. Agriculture equipment is initially rudimentary, then improved gradually and applied more techniques. They build houses following 3 styles: stilt house, a half stilt, and half land house, and non-upstairs house. 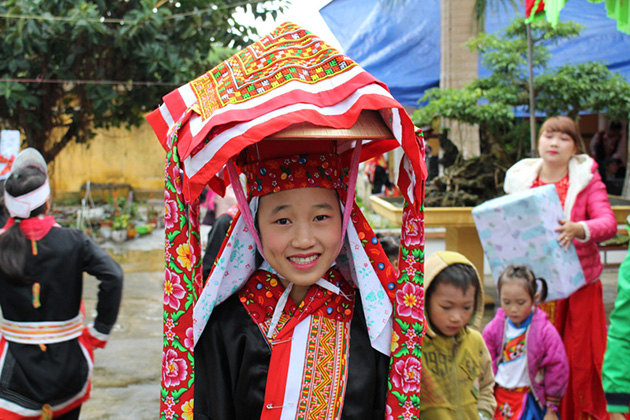 The Dao people speak the language of the Hmong-Dao language system. They have a written one based on Chinese characters but its pronunciation is different. It is called Nom – Dao language. The Dao eldest in the family has the responsibility to teach the Nom-Dao language to their children through ancient books that they kept carefully from generation to generation. In most wards, Han nom (Chinese) characters and Dao language are popular, helping read the ritual texts, folktales, and poems.

In the past, Dao men had long hair with chignon or top tuft. Different Dao ethnic groups have distinctive styles of head-scarves and ways of wearing them. They usually wear short or long shirts. 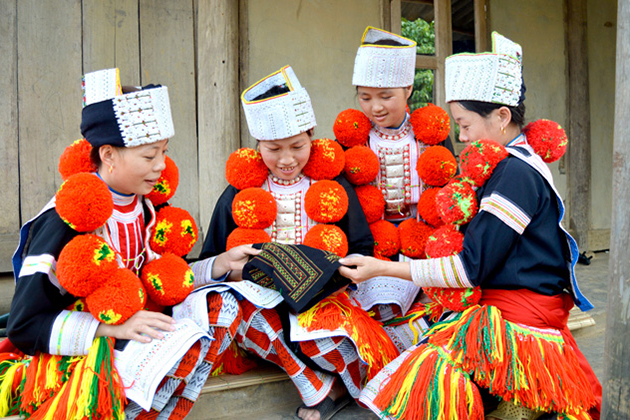 The Dao women combine a shirt, an overall, leggings, a headscarf embroidered and decorated with colorful pattern,s and gold and silver jewelry in their daily and traditional costumes. It is simple for men to wear a short shirt with around 5 buttons closed in the front; wide-crotch trousers for conveniently moving. They all enjoy wearing the silver necklace, bracelets, and anklets because they believe that silver jewelry will protect them from evils, wind, and be blessed.

The Dao preserve and develop a very rich unique culture, in which, singing and poetry composition is the most popular entertainment activities. Single or call and response singing are used in village festivals, New Year vacation, new house ceremonies, or fair market occasions. They create a huge number of traditional instrument assets: drum, cymbal, bell, horn, flute, and mouth harp. In addition, many folk games are still maintained and played in all important festivals and vacations named as dance, rope swing, and stop spinning. 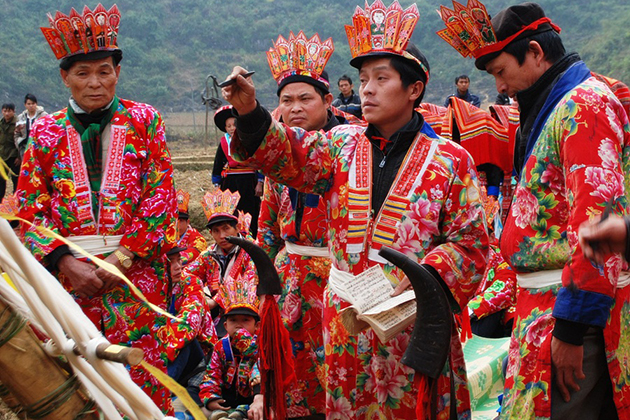 Their traditional Tet happens at the same time as the King’s Tet. These days, they gather at the village head’s house to prepare all things of “Tet Nhay” (Dancing Festival). In the festival, all the people in the village dancing continuously day and night, until being tired, they can be out of and make way for others. Tet Nhay is a unique traditional cultural activity and a synthesis of Dao folk art such as dance, music, and poetry. All of that “Festival Dance” of the Dao is the definition of cultural activities synthetic nature of the folk art forms such as dance, music, language … all draw out the Dao’s own distinctive colorful features.

Almost Dao people follow Confucianism, Buddhism, and Taoism which are the most typical religions in Vietnam. They extremely care about an ancestor and God’s worship, one of the most important customs of Vietnamese people generally. There are two main worships are ancestor one (so-called Ban Ho) and Ban House (so-called Ban Vuong). For the first one, the altar is put on the most sanctuary place in a house, the concept that their ancestors are not always on the altar at which they only visit on the first day or the full moon day of a month. Bàn Vương worship is a worship of a legendary god. They believe that it involves the destiny of each family, only when spending whole heart into Bàn Vương worship, family members are healthy, and these clans will be prosperous. 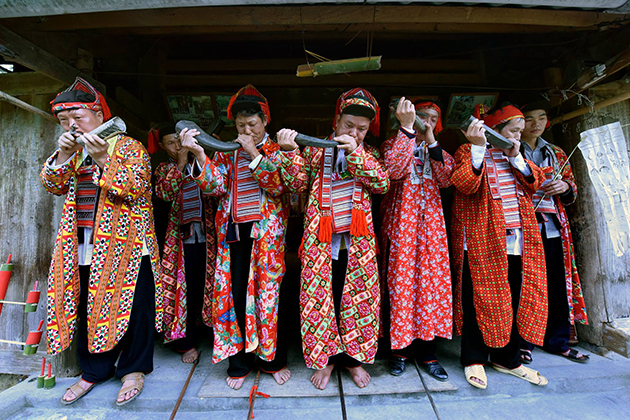 Marriage custom is also one of the most interesting traditions of Dao people. Before boys and girls come to marriage, their dates of birth have to be considered and consulted with a diviner. He will interpret their future by using chicken legs to see if this Dao couple can come to a compatible match. During the marriage ceremony, before entering the house, Dao people usually stretch a piece of string in front of the procession or exchange songs between the couple’s families. One other exciting thing is that the bride is carried on the groom’s back when the bride sets foot on the groom’s house. She has to step over a pair of blessed scissors as crossing the threshold into her husband’s home.