Welcome to the National Museum of Cambodia where the vivid flow of Cambodia’s history and culture will lead you to discover the astonishingly enormous picture of Cambodian development.  Located in Chey Chumneas, Phnom Penh, this is Cambodia’s largest museum of cultural history and is the country’s leading historical and archaeological museum.

The museum has one of the world’s most comprehensive collections of Khmer art, including sculptural works, Khmer pottery, bronzes, and ethnographic artifacts. Such an assemblage spans from the prehistoric time through the era before, during, and after the Khmer Empire, which included Thailand, Cambodia, and southern Vietnam as its trace.

The Cambodian National Museum’s detailed address is on Street 13 in downtown Phnom Penh, just north of the Royal Palace and west of Veal Preah Man Square. Visitors may enter the property at the junction of Streets 178 (to the north), Street 13 (to the east) and Street 184 (to the south). On the west side of the museum, it is the famous Royal University of Fine Arts which is also the oldest university in Cambodia.

The National Museum of Cambodia maintains one of the world’s most extensive collections of Khmer cultural artifacts, including sculpture, pottery, and ethnographic materials ranging from prehistoric, pre-Angkorian, Angkorian, and post-Angkorian periods. Through the exhibition, conservation, preservation, interpretation, and acquisition of Cambodian cultural relics, the Museum raises awareness, knowledge, and appreciation of Cambodia’s heritage. It is expected to educate and inspire the visitors. 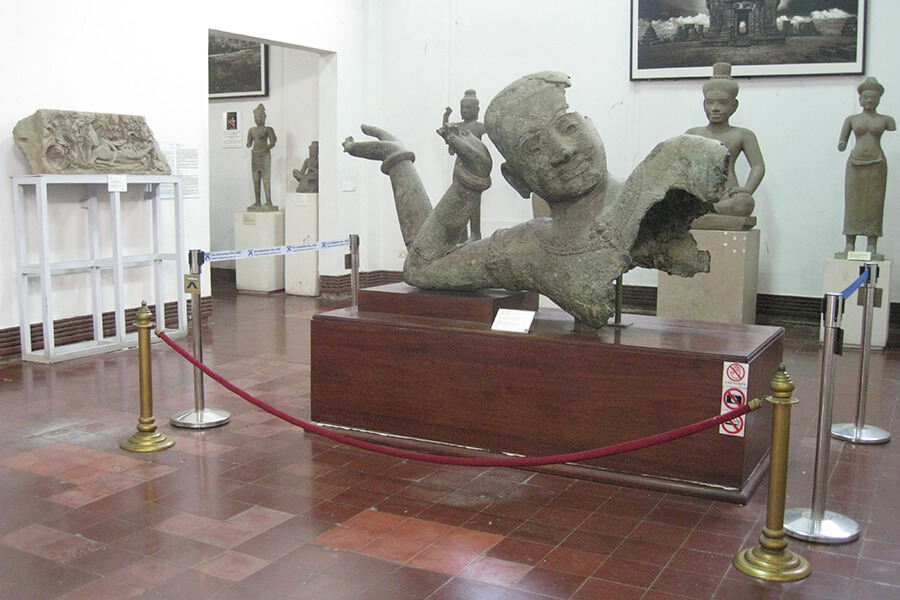 According to archaeological and historical research, inscriptions and related documents, the region is controlled by the civilization of ancient Cambodia. Since the beginning of the Christian period, it has been affected by Indian culture, and the two major religions of India, Hinduism and Buddhism, have coexisted. In regard to these religious practices, the ancient Khmers left behind many master works in both architecture and sculpture. The ancient Khmers left several masterworks in building and sculpture in relation to their religious rites, which now are protected by the museum.

Many historical temples with elaborate ornamentation were believed to be gods’ mansions. Although some temples were destroyed, there are others who, like Angkor Wat, which is acknowledged as an architectural marvel across the globe, have been conserved for the public to see. The ancient Khmers also left countless works of art, the majority of which depict key Hindu and Buddhist divinities. Moreover, objects involved in religious rites, as well as daily utensils, are also included.

The National Museum of Phnom Penh, which opened in 1920, is in charge of preserving and displaying these treasures to the public. Stone, metal, wood, and ceramics are the four primary materials of its collections. Despite their destruction, the relics retain significant artistic, historical, and religious significance. The most emblematic artifacts in each category convey Khmer identity as well as style. The study of these masterpieces reveals that, despite the impact of Indian civilization, Khmer artists did not just replicate Indian art, but instead developed a wholly unique work with its own personality.

Nowadays, for tourists who want to take a Cambodia tour, the National Museum in Phnom Penh is the most suitable stopover to discover and learn more about the history and traditions of this country. 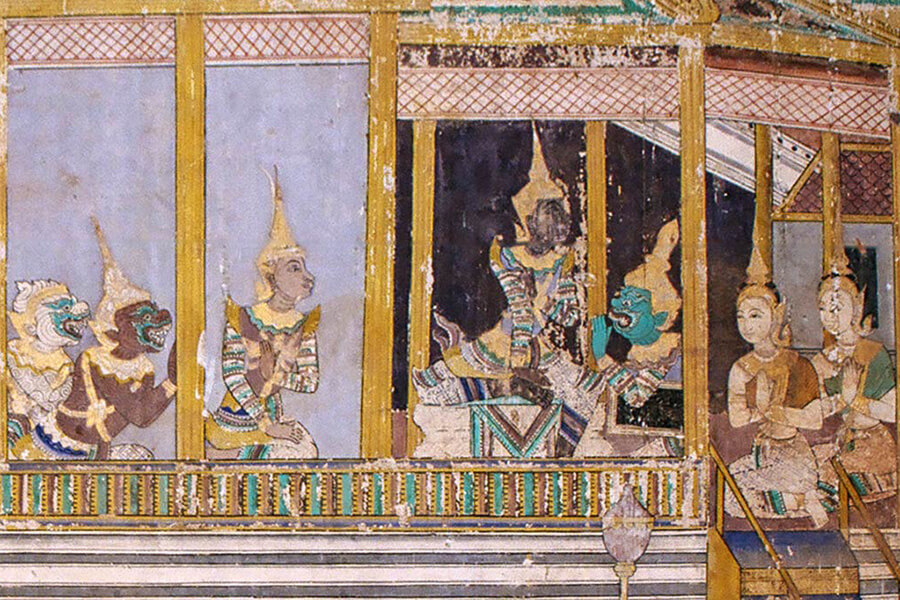 This quintessential building that is today synonymous with ‘traditional Khmer’ architecture was the masterpiece of George Groslier (1887-1945). He is a historian, curator and author who was the motivating force behind much of the revival of interest in traditional Cambodian arts and crafts. It’s perhaps a better description as a structure based on Cambodian temple prototypes seen in ancient bas-reliefs and reimagined through colonial eyes to satisfy museum-size criteria.

Groslier’s expected museum was quickly closely associated with the Ecole des Arts Cambodgiens (1917), and the Musée du Cambodge was established in 1919. In 1920, the museum was renamed Musée Albert Sarraut in honor of the then-Governor-General of Indochina, Albert Sarraut.

On August 15, 1917, the foundation stone for the new museum was placed. The completed Musée Albert Sarraut was launched on the 13th of April 1920, at Khmer New Year, in the presence of H.M. King Sisowath, François-Marius Baudoin, Résident-supérieur, and M. Groslier, directeur des Arts Cambodgiens et conservateur du Musée. The building’s initial design was somewhat revised in 1924 with the addition of wings at either end of the eastern façade, making it much more imposing.

From the 1920s to the 1940s, the museum’s early directors made significant contributions to knowledge of the rapidly expanding collection. Groslier cataloged the collection himself, followed by Jean Boisselier and Solange Thierry (interim Director) who each added their own talents to cataloging and management. On August 9, 1951, the French were forced to hand over control of the National Museum and Arts Administration to the Cambodians, and following independence in 1953, the then Musée National de Phnom-Penh was the subject of bilateral agreements. On November 7th, 1956, under the guidance of Madeleine Giteau, Conservatrice du Musée National, the museum continued to  thrive from 1956 until 1966. Chea Thay Seng, the first Cambodian Director of the National Museum and Dean of the newly established Department of Archaeology at the Royal University of Fine Arts, was appointed in 1966. This institution, which was founded in 1920 as the Ecole des Arts Cambodgiens and has been closely associated with students, craftsmen, and professors working to conserve Cambodian cultural traditions, is still located to the museum’s back. 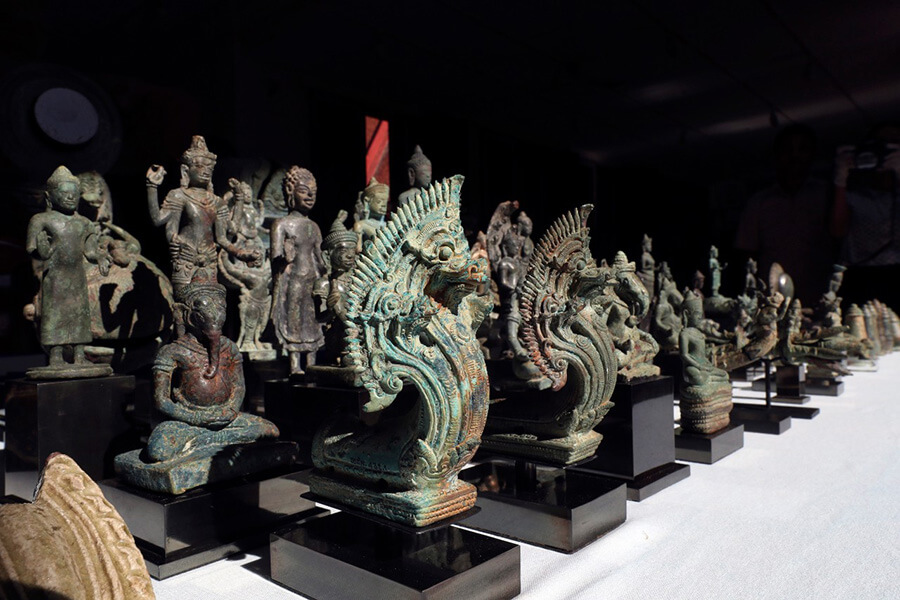 The museum is under the authority of the Cambodian Ministry of Culture and Fine Arts. Constructed between 1917 and 1924, the building, inspired by Khmer temple architecture, was officially inaugurated in 1920, and it was renovated in 1968. The museum promotes awareness, understanding and appreciation of Cambodia’s culture and heritage, aiming to educate and inspire its visitors.

The Cambodia National Museum’s architecture is a combination of French and Cambodian architecture. In comparison to other well-known architectural works in Cambodia, this is also a distinguishing element of the national museum. The magical mixture creates a one-of-a-kind architectural treasure, attracting both Cambodians and visitors. Tourists visiting the museum will be able to see a massive collection of precious antiques, including over 5000 relics that have been meticulously kept throughout time. The National Museum, which was built in two architectural styles, emits magnificent and elegant grandeur. Huge expanses, as well as the strategic display of antiques at each era of history, assist visitors in understanding the country’s history.

Despite the fact that the museum was constructed in 1917, the entire system of objects on exhibition has a long history. Many items from the third century to the present have been preserved. The Cambodian people give considerable attention to preserving historic artifacts, protecting them in the same way that they struggled for their country’s independence and freedom. As a result, in addition to sightseeing, visitors to the National Museum of Cambodia may listen to history and discover more about the people who live here, their emotions, and their faith in spiritual forces. 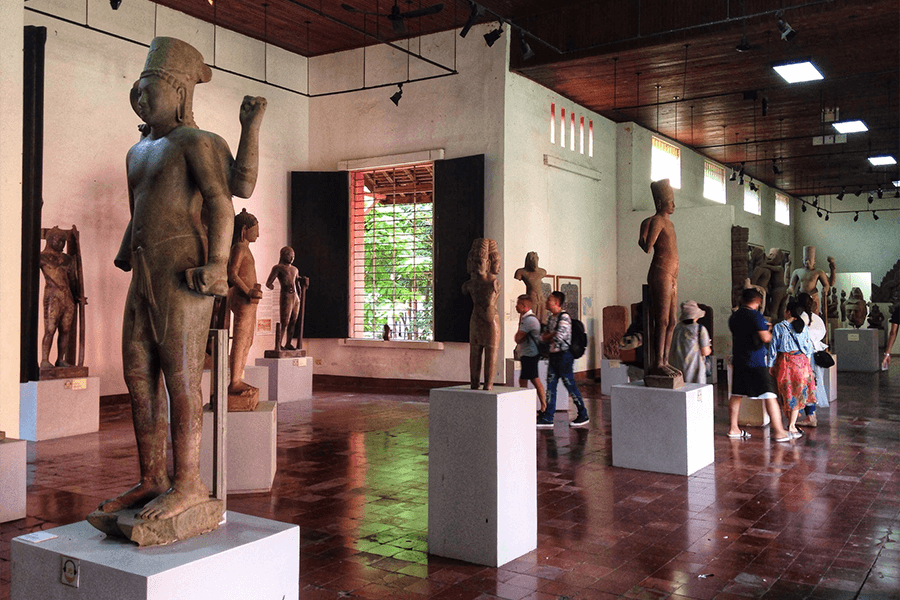 The museum is open from 8.00am until 5.00pm all seven day in a week. The last admission tickets are sold before 4.30pm. It takes US$10 for foreigners from 18 years old and above; US$5 for foreigners ages from 10 to 17; 500 Riels (Cambodian currency) for Cambodians. Children and school groups can visit for free. The entrance fee is greatly fair since this destination offers the largest historical knowledge of Cambodia and a destination that you should not miss when having a trip to Phnom Penh.