Tet is the transitional moment between the previous year and the new one. Apart from spending time for family reunion and relax after one year with many ups and downs, people also spend on their spiritual life, paying respect and gratitude toward the deceased and their ancestors. Therefore, visiting temples, pagodas, and other sacred places as well as praying for good luck, wealth, health and safety during the New Year actually has been a deep-rooted tradition of Vietnamese people.

Visiting pagodas and temples
Pilgrimage to sacred institutions especially Buddhist temples is undoubtedly a long-lasted custom of Vietnamese people. It is a long-held belief that the very first moment of a new years is the most solemn and holy moment of the year, and if they pray their wishes at that time, every wishes will come true.
People will prepare a lavish tray (usually including steamed rice, pork, fruits, flowers, incense, hell-notes…) to offer to the Buddha the Gods of this temple. While praying for their wishes, people will speak their wishes and burn sticks of incenses as incense stick is believed to be the way for people to connect with the deceased and spiritual beings.

Apart from wishing for good luck, heath, happiness and prosperity in the coming year, praying at these spiritual places is the best way to go out, enjoy the spring and indulge in holy atmosphere during the festive atmosphere of Tet.

Also, mixing our soul with the spiritual spaces, breathing in the aroma of burning incense and flowers and enjoying relaxing glimpse in the garden of the pagodas is unquestionable the best way to demolish all the stresses and worries of the previous year and keep our life balanced between material and spiritual life.

Differences in visiting pagodas in the North and the South
Although people in all areas visit temples and pagodas for the same purposes, the way they conduct this practice varies greatly from this region to another.

While Vietnamese Northerner well and complicatedly prepare the offering tray with a number of scarifying items ranging from ranging from pork, meat-roll and chicken to fruits, flowers, incense, hell-notes, real money and petition note written in Nho script with wishes for the new year on, Southern people don’t bring so many offering items to pagodas.
Besides, unlike Northern people who pray for their wishes in rhyme and tune, people from the southern simply whistle their wishes, so called “khan nom”. 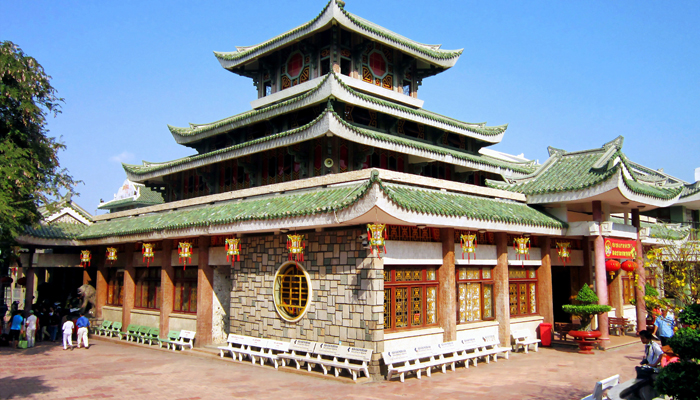 Although there is a difference in the way people conduct the pilgrimage, this noble tradition still remains its real meaning, in which any barrier of age, status or sex are eliminated, everyone unite there, in a mutual spiritual world.

Picking Buds and planting trees
No one forget to pick a small brand of tree from pagodas after they have done all the praying. The picked buds could be a small flower like the very meaning of it, however, people commonly pick a small brand in the pagoda’s campus as plant, in Vietnamese people’s belief, signifies for immortal life. Bring a small sacred branch of tree from pagodas would bring healthiness and prosperity to ones’ home.

Due to the fact that no kind of things on Earth grow faster, more stable and more long-lasting than plant, people usually visit markets. In Northern Vietnam, we have Vieng market which show many kinds of ornamental plants. People go there to sell and buy things for lucky, and don’t forget to get a small tree, bring it back to their home to grow. This practice is believed to bring growth and prosperity for the homeowners.

Lots drawing & fortune telling
Apart from visiting pagodas, lots drawing is a long –rooted tradition of Vietnamese people. In the old time, after praying for their wishes, people normally picked a made-of-bamboo which had recorded numbers or a short paragraph in Han to forecast life’s fortunes of people in the coming year. Today, instead of bamboo cards, paper cards are used temples and written in the national language which is much more understandable.

Lots drawing and praying for a happy new year

The content of the card mainly focus on the fortune of the card pickers. Good or bad lots represents by its name of hexagram. There are also specific explanations for financial matters, fame, and marriage …
Whether the drawn lot is good, or bad people still enjoy it. If good fortune is forecasted, people would be much happier to welcome the new year, so that they could be more confident to do their wishes and would be more successful. If the unlucky on is predicted, people will be more carefully in every action, due to this, they would achieve their gold than expected.
Lots drawing has been co-existed with our nation for a long time, which expresses belief, hope of luck, and peace in the whole year ahead of Vietnamese people. This ritual has been well preserved and has been passed from generation to another and has become a necessary part of Tet.